Giro D’Italia – the round of Italy

Yesterday was the first stage of Giro D’Italia in Apeldoorn. It was a time trial and, as always, the first duel for the pink Jersey was an exiting one with success for the Dutch rider Tom Dumoulin from team Giant-Alpecin.

Today, teams raced from Arnhem to Nijmegen in their best pace. The countdown to 29 May in Torino to win this classic is on! 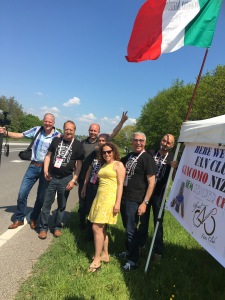 I went to check it out. I bumped into these enthusiastic Italians.The Giacomo Nizzolo fans club. He is the sprinter from team TREK-Segafredo.

Well, after following Tour De France last year I began to understand the rules regarding the cycling classics. Obviously  my favorite  part is the fashion – the jerseys. I somehow have seen these were hot in late 70’s. With a great six pack these tight tops look fabulous!

This site uses Akismet to reduce spam. Learn how your comment data is processed.